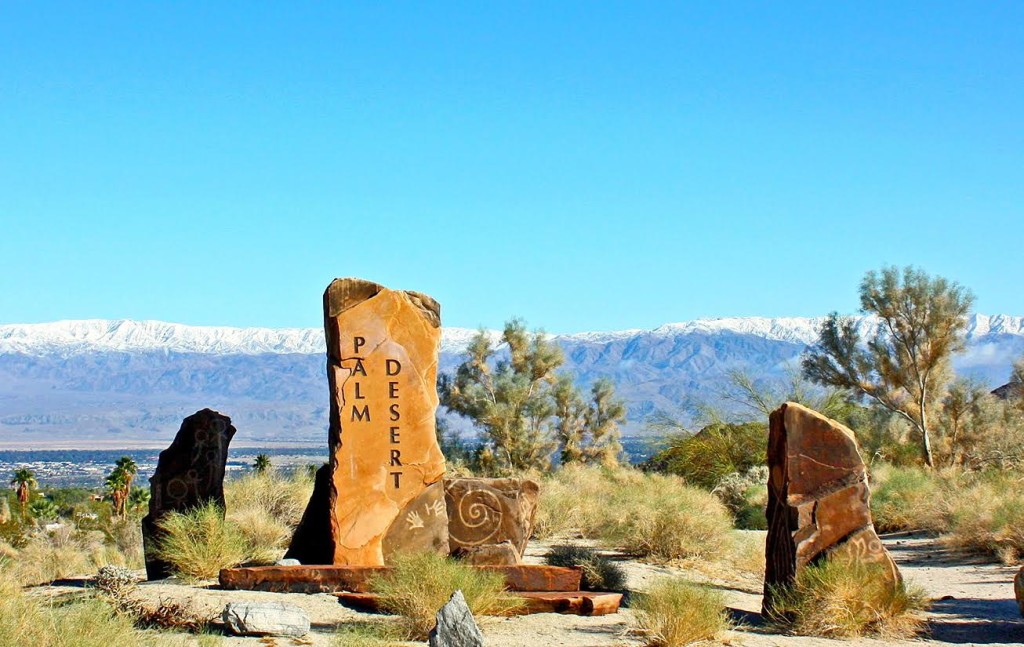 Located approximately 14 miles east of Palm Springs, the beautiful city of Palm Desert has been one of California’s fastest growing cities, growing from a mere 11,000 residents in 1980 to well over 50,000 residents today, swelling to double those numbers in the winter months when the city welcomes many sun-seeking snowbirds escaping from colder climates. A mean annual temperature of almost 76 degrees Fahrenheit makes Palm Desert one of the warmest places in the United States. (The hottest temperature ever recorded here was 125 degrees Fahrenheit, on July 6th, 1905.)

Although early maps labeled it as a “Sand Hole”, the Palm Desert area was officially first known as The Old MacDonald Ranch. The name changed to Palm Village in the 1920’s when vast date palm orchards were planted. In the 1930’s a few homes were built. The first residential development occurred in the early 1940’s in connection with an Army maintenance camp in the area. World War II brought General Patton to the area to train for African warfare as the local terrain was similar to conditions found in the African desert. In 1948 the Palm Desert Corporation began to officially develop real estate and in 1951, the area was given the name Palm Desert. One of the first planned developments was the Shadow Mountain Club, a development of over 1,600 acres, located just off Portola Avenue in South Palm Desert. Early residents and investors included Hollywood celebrities Edgar Bergen and Harold Lloyd, as well as Leonard Firestone, a scion of the famous tire family.

Palm Desert is truly a year-round destination offering residents and visitors a wide plethora of attractions. In the heart of Palm Desert, El Paseo Drive is a popular, world-class shopping and dining district, with many upscale shops and galleries. The Living Desert Zoo, Agua Caliente Cultural Museum, the College of the Desert, and the renowned McCallum Theatre are just a few of the institutions that call Palm Desert home.

There are many diverse neighborhoods in Palm Desert, which is basically divided into North, South, and East Palm Desert. Many offer spectacular elevated views of the desert and the surrounding mountain ranges. From gated, ultra-exclusive luxury golf communities like Bighorn Golf Club, with its host of A-list celebrity residents, to top-notch clubs like Ironwood Country Club, Monterrey CC, and Sun City, buyers have a wide choice of home locations, styles, and price ranges from which to choose their desert residence.